Angels are valuable friends to humanity. They are creatures of pure intellect, messengers of God, attendants, and often appear as humans to carry out their missions. Some people have seen their guardians and have been told their names. God created nine choirs of angels. Of those choirs are the Archangels, the highest rank of the choirs.

There are four archangels that we recognize: Michael, Raphael, Gabriel, Uriel. Each has a different task and a chaplet of their own for us to implore their aid. Perhaps the most necessary in this current climate of the world and the Church is the chaplet of St. Michael.

Origin: One day St. Michael Archangel appeared to devotee Servant of God Antonia De Astónac. The Archangel told the nun that he wished to be honored through recitation of nine salutations. These nine salutations correspond to the nine choirs of angels. The chaplet consists of one Our Father and three Hail Mary in honor of each angelical choir.

Promises: To those that practice this devotion in his honor, St. Michael promises great blessings:

1. To send an angel from each angelical choir to accompany the devotees at the time of Holy Communion.

2. Additionally, to those that recite these nine salutations every day, it assures them that they will enjoy his continuous assistance. That is to say, during this life and also after.

3. Furthermore, they will be accompanied by all the angels and together with all their loved ones, they will be freed from Purgatory.1

St. Michael is a great warrior and fights for us against Satan, who we are told in 1Peter 5:8, prowls around like a roaring lion, seeking to devour souls. It seems that lion is a bit engorged considering how much has been devoured in the past years, months and days. The chaplet of St. Michael is a great way for the laity to enter into the fight for Truth, Beauty, and Goodness.

The chaplet is said on beads that are in groups of three separated by a single bead. Below is a website link that you can use to pray the chaplet.2 If you would like to have a printed version you can find them outside the music office. 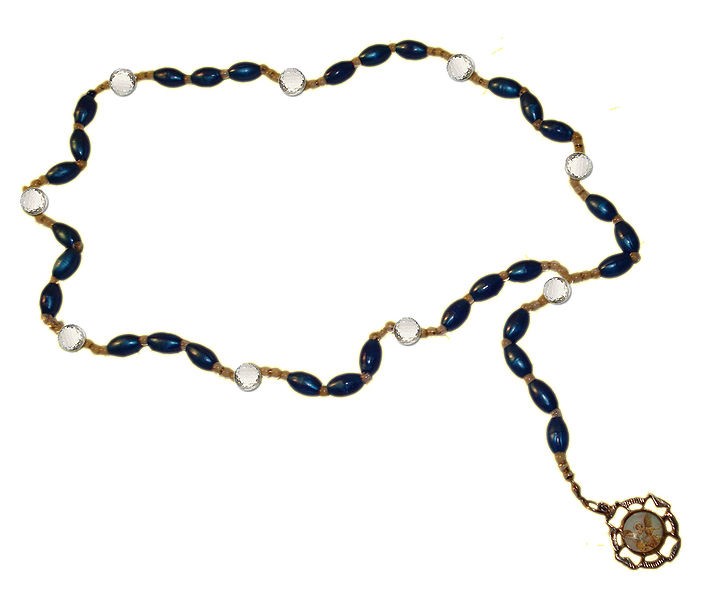