On Divine Mercy weekend, the St. Barnabas and St. Lawrence Basilica Respect Life Ministries hosted a joint event at St. Barnabas in Arden. International, pro life and chastity speaker, EWTN Espanol host, and co-author of “Transfigured”, Patricia Sandoval shared her powerful testimony of a harrowing escape from drug-addiction, homelessness, and the back doors of Planned Parenthood. Her story penetrated the hearts of those in the audience. There were approximately 55 people present. Patricia Sandoval (excerpt from testimony): “These aborted babies are our modern day martyrs, same as the first Christians who met their death in the Colosseum. When we are before God to be judged, Jesus is there with his Divine Mercy but those who have defended life will have in addition, an army of martyrs who will come forth and say, “Lord, Lord have mercy on them, for they defended us.”” Patricia Sandoval has been invited to speak at the White House in front of U.S. Senators and has visited many other countries to advocate for the unborn, and to help change legislation. Patricia and her husband recently relocated to the Asheville area and just celebrated the recent birth of their first child. Her story can be found on YouTube and www.patriciasandoval.com.

Here are a few comments from the audience:
Jennifer Kelsch, parent & art teacher at Canongate Catholic High School: “In the name of "women’s right to choose," what women are offered is a truly horrific choice; they are asked to choose in an environment of coercion when they are at their most vulnerable time. What Planned Parenthood offers feels much more predatory than liberating.”

Katherine Kelsch, age 14: “I was most surprised to hear that there were girls my age, in 8th grade, that are going by themselves to have abortions. I have never gone to the doctor by myself for even a checkup. I could understand how scared they’d be. I would be terrified."

Grace Kelsch, age 17: "I think it's important for people my age to hear about abortion first hand because it makes it real and not just a philosophical thing to be debated.”

Victoria Cambron, nursing student: “I hope that more and more doctors will realize that performing abortions does not fulfill their promise made with the hippocratic oath; not just to the unborn baby, but to the mother.”

Nancy Sypolt, RN: “I was in tears the entire time!”

Peg Schneider, RN: “I never thought about all the generations the one abortion cancelled”.

From Anonymous:
“I also had three abortions like Ms. Sandoval. My first live birth was late in life. Unfortunately, at the time I did not know about Rachel’s Vineyard and had no idea that post-abortion stress syndrome was a major contributor to the severe postpartum depression that I was experiencing.”

Joan Pajak, RN: “What I liked especially is that she included discussing the pain that fathers go through when their wives/girlfriends get an abortion against their wishes as well as the victimization of the Planned Parenthood workers (i.e. incentive salary to hook you and then persecution if you leave and speak out).” 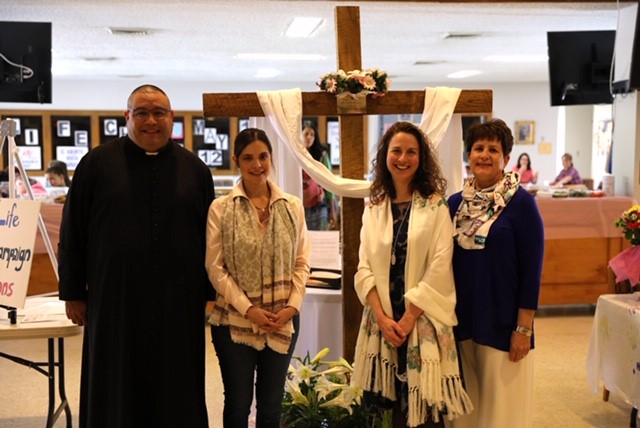