What's the Deal with Halloween?

What’s the Deal with Halloween?
Since Halloween is just around the corner, it is important to consider how to celebrate without losing touch with God and the Tradition of the Church.  There are many controversies surrounding the celebration of All Hallows’ Eve.  Isn’t this a pagan holiday rooted in evil and witchcraft?  No, actually it isn’t.  The exact origin of the celebration of All Saints Day is not completely known but around 313, when Christianity became legal, a common commemoration of martyrs appeared in various areas throughout the Church.  For example the eastern city of Edessa celebrated on May 13, the Syrians on the Friday after Easter, and Antioch on the first Sunday after Pentecost.  On May 13, 609 Pope Boniface IV rededicated the Pantheon under the name St. Mary and all Martyrs.  So how did we get November 1? Pope Gregory III (731-741) dedicated an oratory in the original St. Peter's Basilica in honor of all the saints on Nov. 1 (at least according to some accounts), and this date then became the official date for the celebration of the Feast of All Saints in Rome. Pope Gregory VII (1073-85) suppressed May 13 and mandated Nov.1 as the date to celebrate the Feast of All Saints. So, we find the Church establishing a liturgical feast day in honor of the saints independent of any pagan influence.

However, there is no denying Celtic and pagan activity surrounding that date.  November 1 marked the beginning of the Celtic winter acknowledging the Celtic lord of death named Samhain, literally “summers end.”   The practices surrounding witches, goblins, ghosts, elves and cats came from superstition surrounding this Celtic lord.  The common secular practices were carried over as Christianity spread, perhaps out of superstition at first and then out of fun.  Either way it is important to understand that All Hallows’ Eve – Hallowe’en – is rooted in Christian devotion not pagan superstition.

How can Halloween be celebrated with its original intent?  Dressing in costume was one of those practices that found its way into contemporary celebration.  Dressing as a favorite saint is a great way to show off a hero and evangelize!  Trick or treating is a favorite childhood pastime, however English Catholics would chant a different sort of request:

Soul, soul, an apple or two, If you haven't an apple, a pear will do, One for Peter, two for Paul, Three for the Man Who made us all.

Is it possible to celebrate Halloween as a faithful Catholic?  Yes, as long as the intent is aimed at the Holy Saints and Souls that lead us to God.

For more information on Halloween visit: 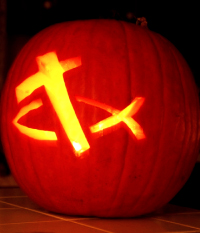